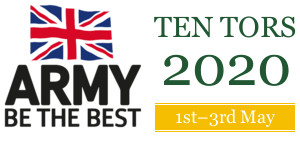 Colonel Dawes has been promoted to Brigadier and is taking over as the Army’s senior officer in Wales. We wish him the best of luck in his new post and hope to see him again at future Ten Tors.

Colonel Holmes is no stranger to Ten Tors as he completed the 45 Miles Ten Tors Challenge in 1985 and has since worked on several Ten Tors events whilst serving in 6th Battalion The Rifles in Exeter. Speaking on his first day in his new post he said ‘It is a delight and privilege to take over as Director Ten Tors. Over the years I have spent much time on Dartmoor – the military training area is without a doubt my favourite one in the country – and I absolutely adore the place. I’ve also got fond memories of completing and helping to run previous Ten Tors weekends. I am now hugely looking forward to once again working with all those who enable this unique and inspirational expedition and wish all those training for this year’s event the best of luck.’